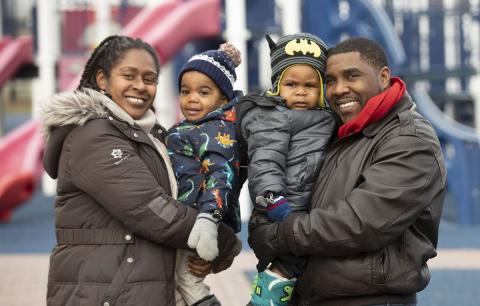 An advisor to former Suffolk County Legislator and Presiding Officer DuWayne Gregory, Richberg began his career in government in in 2010, when he was named Chief of Staff to Legislator Gregory.

Richberg’s years in government are rich with experience, starting in 2010 when he created Gregory’s Youth Leadership Caucus to mentor young adults from the community who volunteer their time on local service projects.

He formalized the internship program in 2015, creating what is now known as the Page Program; an intensive 12-week summer program which provides a select group of college-age students with first-hand experience in government through participation in a mock legislature.

An Eagle Scout, Richberg has served as a member of the NAACP, the Urban League of Young Professionals, The Concerned Fathers of Wheatley Heights and The 100 Black Men of Long Island.

As Clerk, Richberg has worked to make government more accessible to the public by encouraging redesign of the website to ensure documents are readable and providing online information to assist community members with easy access.

Richberg assisted with Hurricane Sandy recovery efforts, walking the 15th Legislative District and working to make residents whole again. He brought in shot spotter to aid the Suffolk County Police Department with its efforts in fighting crime and has assisted with National Night Out in Wyandanch to help bring the community together.

His work with the Suffolk County Legislature has been marked by firsts that benefit residents of the county and ensure their hard-earned dollars are put to good use.

Richberg graduated from North Babylon High School, was President of the Episcopal Diocese of Long Island’s Youth Council as well as his church youth group and is currently The Senior Warden of the Vestry. He is a Sunday school teacher and advisor to the youth group at St. Boniface of Mainz Episcopal Church in Lindenhurst.

Richberg holds a baccalaureate degree in Political Science from Wilberforce University; the first private historically black university in the nation and while attending served as National Pan-Hellenic Council Chapter President as well as president of the Delta Chapter of Kappa Alpha Psi.

He was a Politicorps Fellow and graduated from the Oregon-based programwith Honors in Strategic Planning. While in Oregon, he helped found the Community Fellows Program, helping to hire, mentor and teach eight middle and high school students in civic engagement and coordinate a mass Voter Registration Drive.

He was a Fellow with the non-partisan Young People For, a program of People for the American Way, where he received n award for Outstanding Achievement in Civic Engagement.

He also designed, chaired and implemented the Power @ the Polls campus organization; a student-run voter registration and education campaign, early vote effort and get out the vote initiative on two college campuses in Ohio.